You need to try these deliciously gooey and super chocolaty Nutella hazelnut brownies.

This might be an obvious answer to you. But I must confess, I had never had Nutella until I was in my 30’s. Nutella is a brand of cocoa and hazelnut spread.

I want to talk a bit about the science behind brownies and how different ingredients influence a brownie’s texture.

What makes these brownies so fudgy, gooey, and delicious? The good news is there are only a couple of simple ingredients. The gooeyness comes from the high ratio of fat to flour, lots of Nutella, paying close attention to the baking time, and being careful to not over bake these amazingly fudgy brownies.

Fudgy and gooey brownies have a higher fat to flour ratio. I think the ideal ratio is 2 parts fat to 1 part flour. For this recipe, we will also brown the butter before adding the sugar. Browning the butter gives it a delicious nutty flavor. Check out this blog post from Baker Bettie for more information about using brown butter in baked goods.

If you have never browned butter before, check out this video from America’s Test Kitchen.

Melting the butter also stops air bubbles from forming when it is mixed with the sugar. Adding additional air to the brownie will make them fluffy, which we don’t want.

Brown sugar is more hygroscopic (it absorbs water from its surroundings) than white sugar, which creates a denser gooier brownie.

I used half white and half brown sugar in this recipe to have the best of both worlds. Because Nutella is already sweet we are also able to add less sugar.

Eggs help to bind the brownie together they are also the only leavener in this brownie recipe. Be careful to not over-whip the eggs. We don’t want to add a lot of air to the eggs.

As the eggs cook, their proteins line up and form a structure that will help support the brownie. A brownie without eggs would be a gooey mess.

In this recipe, we are using Nutella and just Nutella no additional chocolate is necessary. I really wanted the hazelnut flavor in these brownies to be strong. Nutella’s already smooth and creamy texture adds to the brownie’s gooeyness.

The best brownie texture comes from using all-purpose flour. When adding the flour you want to be careful to not overmix. Overmixing creates gluten which will develop into a tougher brownie.

Most dessert recipes contain at least a little salt. Salt adds its own flavor but it also intensifies other flavors. In this recipe, salt increases the sweetness of the brownies without adding additional sugar.

To better understand salt’s flavor intensifying abilities try this experiment. If you like sweet tea, brew a cup of tea and add 1 teaspoon of sugar and a pinch of salt. It should taste like you actually added 3 teaspoons of sugar.

The hazelnut liqueur helps to intensify the hazelnut flavor. Who doesn’t like a slightly boozy brownie?

What isn’t in these brownies? Chemical leaveners aka baking soda or baking powder. We don’t want these brownies to rise and become cakey. We want them to remain dense and fudgy.

How to make hazelnut brownies

Line a 9 x 9-inch baking pan with parchment paper allowing the ends to extend over two of the sides. Grease pan with cooking spray. Preheat the oven to 350 degrees Fahrenheit and position an oven rack in the middle of the oven.

Slice the butter into pieces and melt it in a light-colored skillet over medium heat stirring or whisking constantly. Once melted, the butter will begin to foam. Continue stirring/whisking for about 5-7 minutes, the butter will become a deep amber color. Remove the browned butter from the heat, and pour it into a bowl. Allow the butter to cool for 30 minutes.

In a large bowl, mix the butter, brown and white sugar, eggs, egg yolk, hazelnut liquor, and Nutella until combined.

Add the flour and salt and stir until just combined.

Pour the batter into the prepared baking dish. Top with the chopped hazelnuts. Bake at 350 degrees Fahrenheit for 25-30 minutes or until a toothpick inserted in the center comes out with very moist crumbs clinging to it. Remember the brownies will continue to bake as they cool.

Cool completely before using the parchment paper to lift the brownies from the pan and cut them into squares.

What type of pan should you use?

If a glass or dark pan is all you have, reduce the oven temperature by 25 degrees F and keep an eye on the brownies as they bake.

Always grease the pan thoroughly with shortening, softened butter, or cooking spray. To make brownie removal easy, after greasing the pan, line it with parchment paper or aluminum foil. Cut the pieces longer than the pan so that the sides hang over the edge of the pan creating a sling. Grease the lining to make sure it will easily peel away from the brownies.

If your like me and want a visual reference for how to line your pan, check out this video from Everyday Food.

How to check if brownies are done with a toothpick

Baking times for all recipes are only suggestions. The actual baking time will vary depending upon your oven. It is helpful to know your oven and worth purchasing an inexpensive oven thermometer.

Oven temperatures can vary as much as 50 degrees plus or minus. This recipe recommends a baking time of 25-30 minutes But depending upon the accuracy of your oven you may want to start checking the brownies after 20 minutes or so.

When brownies are done they will start to pull away from the sides of the pan. You should also look for a slight jiggle in the middle of the pan of brownies.

One way to check to see if the brownies are done is to insert a toothpick into the middle of the pan. Below are photos of 3 toothpicks. Each toothpick was inserted at different times.

Undercooked batter will be shiny and glossey. Cooked batter and melted chocolate are duller. You need to pay attention to how the brownie crumbs look when you remove the toothpick.

The first toothpick was inserted after the brownies had been baking for 20 minutes. The batter is still raw.

The second toothpick was inserted after 25 minutes. There is no raw batter and a crumb or two. This is when I like to take my brownies out of the oven.

If the toothpick is clean, like the third toothpick inserted after 30 minutes, the brownies are overbaked.

Brownies “carry-over bake,” Meaning they will continue to cook after you take them out of the oven. With this in mind, you should remove the brownies from the oven a few minutes before they are fully done. A slightly underbaked brownie is always better than an overbaked brownie in my opinion.

Checking brownies with a digital thermometer

The most accurate method for checking brownies is to use a digital thermometer. Brownies must have a temperature higher than 136 degrees Fahrenheit which is the temperature at which bacteria such as salmonella dies.

Brownies won’t set until they are at least 144 degrees Farenheight, so unless you want brownie soup, you need to keep baking until they reach this point.

The optimal temperature for these fudgy hazelnut brownies is 165 degrees Farenheight.

How do you cut brownies smoothly?

For neater slices, allow the brownies to cool for at least an hour before cutting. This will allow the chocolate and fat to set. Use a large serrated knife to easily cut even pieces.

How to store brownies after baking

If you are planning to store the brownies rather than eating them right away it is best to wait to cut them until you are ready to eat them. Cutting the brownies exposes them to air causing them to dry out.

Air is the enemy when you are trying to keep brownies moist. Tightly wrap the brownies in plastic wrap or place them in an airtight container.

If you will be storing the brownies for more than a couple of days add a slice of bread. The moisture from the bread will keep the brownies soft and fresh for a few extra days.

Brownies should be stored at room temperature and will stay fresh for at least 3-4 days. If you must store them for longer place them in the refrigerator for up to two weeks. The brownie will have better flavor if you allow it to come back to room temperature before eating it.

For even longer storage brownies can be frozen. Wrap the brownies tightly in plastic wrap and then place them in a zip-top bag. Label the bag with the date and contents. Frozen brownies will stay fresh for up to three months. Allow the brownies to thaw at room temperature before eating.

If your brownies do dry out place them in the microwave for about ten seconds.

This information is provided as a courtesy and is an estimate only. This information comes from an online calculator. Although raspberriesandkohlrabi.com attempts to provide accurate nutritional information, these figures are only estimates.

I publish new recipes every week! Sign up for my email newsletter to be the first to know when new recipes are published.

If you try this recipe, let me know! Leave a comment and rate it! You can also snap a picture and post it on Facebook be sure to tag me @RaspberriesandKohlrabi.

Loved these brownies? Try one of my other desserts 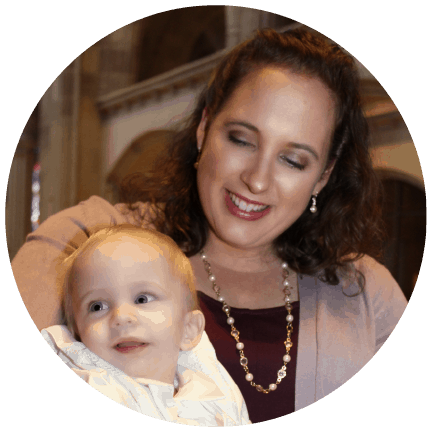 Hi! I am so happy you are here. I love helping people learn to cook. Cooking has always been one of my favorite activities. I love finding new recipes and serving them to friends and family. I can’t think of a better way to tell someone you care about them than by serving them a delicious meal.

We use cookies to ensure that we give you the best experience on our website. If you continue to use this site we will assume that you are happy with it.YesNoPrivacy policy
You can revoke your consent any time using the Revoke Consent button.Revoke Consent